What is a mammary tumor? 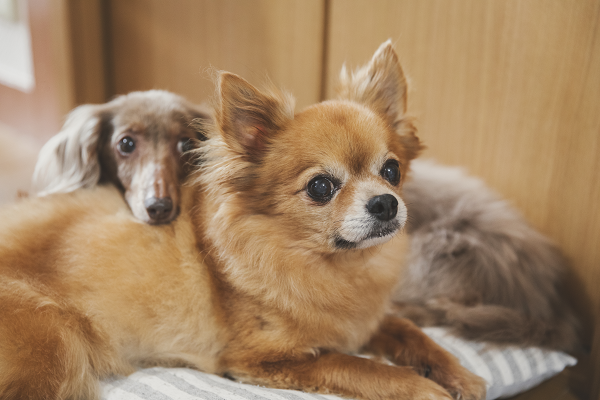 A mammary tumor develops because of abnormal replication of the cells that make up the breast tissue. Mammary tumors can be benign (non-cancerous) or malignant (cancerous). These two forms of the disease have different diagnostics, treatments, management, and prognosis (see handout “Benign Mammary Tumors in Dogs” for information on the non-cancerous form of the disease).

There are several different types of malignant mammary tumors, with carcinomas being the most common. Carcinomas arise from epithelial (skin) cells, tubules of the mammary glands, or other cells found in the mammary chain.

There are other cancers that can affect mammary glands, including osteosarcomas (see handout “Osteosarcoma in Dogs” for further information on this type of cancer).

What causes this cancer?

The exact causes for the development of mammary tumors in dogs are not fully understood. It is well known that exposure to specific hormones, namely progesterone, increases the risk of developing mammary cancers in dogs. This is because progesterone stimulates growth factors (molecules that stimulate specific processes in the body) that cause mammary cells to multiply.

"Dogs spayed prior to their first heat  have only a 0.5% risk of developing mammary tumor(s)"

The incidence of these tumors is related to whether a dog is intact or has had an ovariohysterectomy (has been spayed). Dogs spayed prior to their first heat (also called estrus) have only a 0.5% risk of developing mammary tumor(s). However, after a first or second heat, this dramatically increases to a risk of 8% and 26%, respectively. Age also appears to play a role; the risk of tumor development significantly increases once a dog reaches seven years of age and continues increasing until 11-13 years of age. This increased risk is breed-dependent, indicating that there is a genetic component.

Certain breeds appear to be more commonly affected, including Chihuahuas, Poodles, Dachshunds, Yorkshire Terriers, Cocker Spaniels, Brittany Spaniels, English Setters, Boxer Dogs, and Doberman Pinchers. Research in veterinary medicine continues but, to date, we still know little about which genes and mutations can lead to the development of mammary tumors in dogs. In human medicine, research has established a definite relationship between the BRCA gene (breast cancer gene) and the development of breast cancer. Research is ongoing, but there may be a link between mammary tumors and similar genes in dogs.

What are the clinical signs that my dog has this type of tumor? 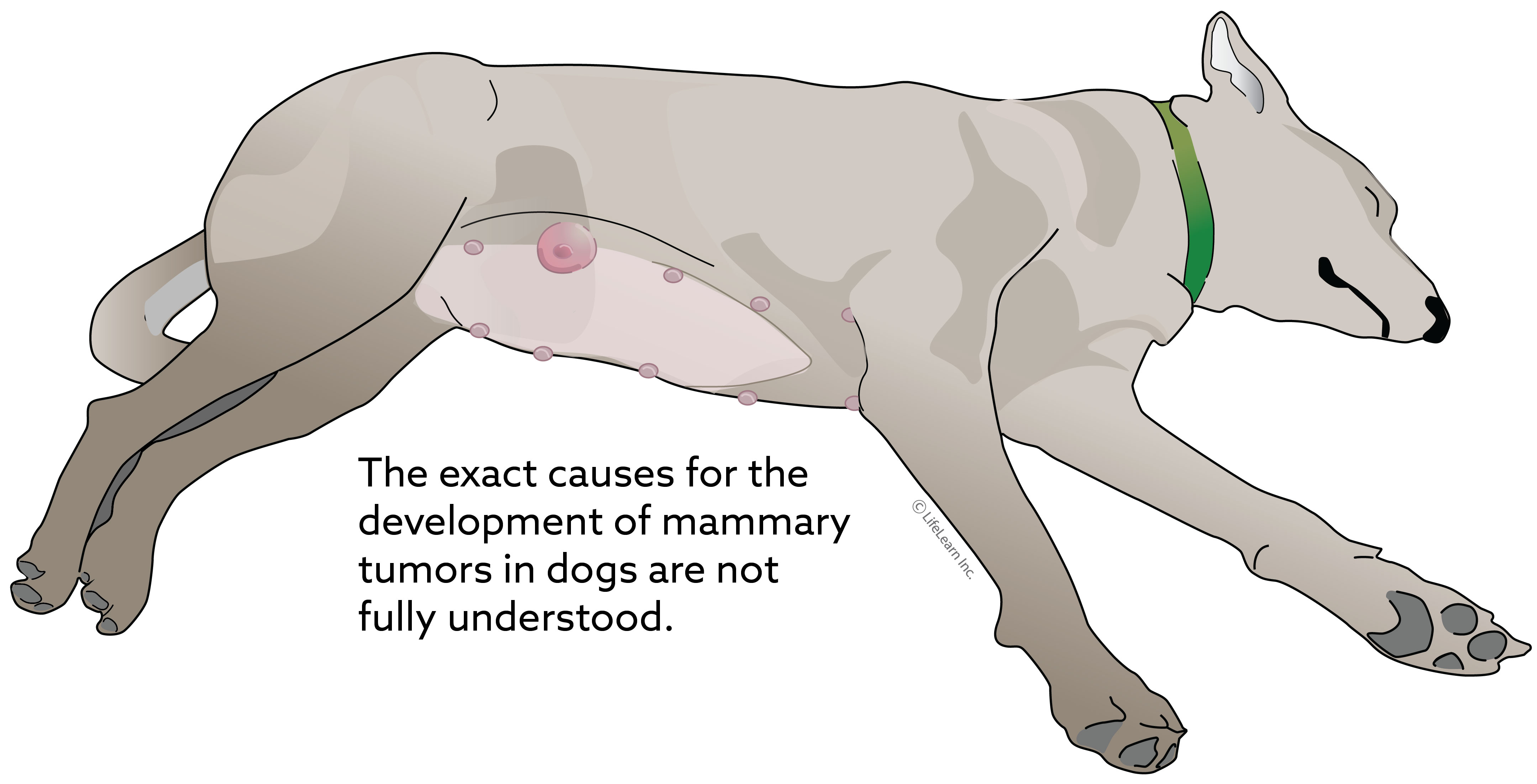 The most common clinical sign of a malignant mammary tumor is one (or more) palpable masses underneath the skin of the abdomen. They may be next to or within the nipple and follow along the mammary chain (see illustration). The size of the mass(es) and their appearance may vary, but they are usually firm and nodular. Occasionally, the skin over the mass may ulcerate (open) and bleed, and the affected area may feel warm to the touch and become painful. The mammary gland may even produce a discharge.

If the tumor has metastasized (spread to other areas of the body), other signs may become evident. Your dog may generally feel unwell, eat less, become lethargic, and lose weight. If the lungs are involved, your dog may have problems with breathing or develop a cough.

How is this type of tumor diagnosed?

These tumors are typically found as either singular or multiple nodules along your dog’s abdomen during a physical exam. Other procedures are then performed to determine the type of tumor and whether it is benign or malignant.

A common procedure to diagnose this tumor is a fine needle aspiration (FNA). FNA involves taking a small needle with a syringe to suction a sample of cells directly from the tumor and placing them on a microscope slide. A veterinary pathologist then examines the slide under a microscope. FNA can help distinguish between mammary and non-mammary tumors, however, it typically does not distinguish between benign and malignant tumors. Because of this, your veterinarian may recommend a biopsy (surgical excision of a piece of the tumor) or removal of the entire tumor. Pieces of the tumor are then examined by a veterinary pathologist under the microscope. This is called histopathology. Histopathology is not only helpful in making a diagnosis but can also indicate whether the tumor is benign or malignant and how the tumor is likely to behave.

Given the risk of metastasis with malignant mammary tumors, your veterinarian may also recommend staging (searching for potential spread to other locations in the body). This may include blood work, urinalysis, radiographs (X-rays) of the lungs, and possibly an abdominal ultrasound. The lymph nodes associated with the mammary glands may be sampled by FNA, even if they seem normal.

The way malignant mammary tumors typically progress is entirely dependent on the type and size of the tumor(s) and whether metastasis has occurred. Large tumors (greater than 3 cm) and those with evidence of spread have a poor prognosis. Tumors smaller than 1 cm have a better prognosis. Detecting and treating these tumors when they are small, and before spread has occurred, will provide your dog with the best chance for long-term control.

"Detecting and treating these tumors when they are small, and before spread has occurred, will provide your dog with the best chance for long-term control."

What are the treatments for this type of tumor?

For dogs with solitary mammary tumors, surgery is by far the best treatment. If there is only one small mass, and staging shows no evidence of spread, surgery may be the only treatment your dog receives.

For dogs with multiple tumors of one or both mammary chains, the associated – or all – of the mammary glands may need to be removed. If your dog is intact, an ovariohysterectomy is recommended and may be done at the same time as mammary gland removal.

For dogs with larger tumors or evidence of spread to other areas of the body, chemotherapy is typically recommended. There is increasing evidence that radiation therapy, in addition to chemotherapy, may provide some benefit for dogs with inflammatory carcinomas. Your veterinarian will discuss the options that are best suited for your dog’s particular situation.

© Copyright 2022 LifeLearn Inc. Used and/or modified with permission under license.

*Closed for Lunch from 1-2 each day