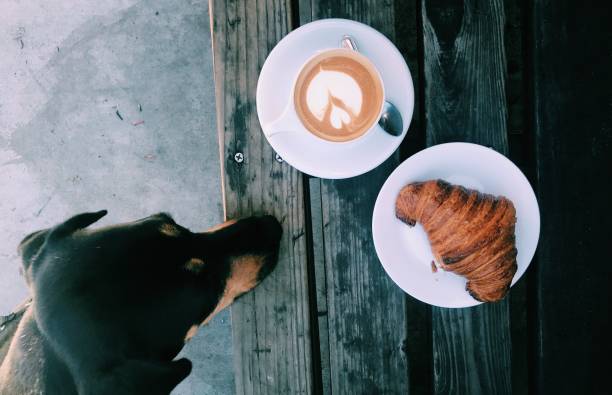 We may start the morning with a jolt of caffeine, but our pets do not need a cup of coffee to get their day going. In fact, they usually wake up tail wagging, ready to go. And if they need a rest later on, they do not feel the least bit guilty about settling down for a little nap on the couch instead of an afternoon cup of joe. Why should not they enjoy an afternoon siesta? They do not have to study for a test, cook dinner, or finish a business report on schedule.

It’s good that dogs and cats do not depend on caffeine to get through the day. This particular chemical boost can be toxic for them.

What are some common (and not-so-common) sources of caffeine?

Pet owners may not realize that caffeine can be harmful to their pets. They also may not know that many foods and drinks in their cupboards contain caffeine. Most people name coffee as the number one source of caffeine and they are right. Most households have coffee in the pantry, but many teas and sodas contain caffeine too. And do not forget about those energy or sports drinks in the fridge. Other common sources of caffeine are diet pills, over the counter pain medication combinations, over the counter energy boosting products, and coffee grounds.

"Pet owners may not realize that caffeine can be harmful to their pets."

What are the symptoms of caffeine toxicity?

Caffeine is a stimulant, which is why it helps us stay awake. Most of the signs of toxicity are a result of the stimulant effects of caffeine. Think about how you feel after 3 cups of coffee and you will get a good idea of what your dog or cat is experiencing after lapping up a spilled energy drink.

"Pets that consume caffeine may have an increased heart rate and become hyperactive."

Pets that consume caffeine may have an increased heart rate and become hyperactive. They get jittery and restless and do not want to lie still. They may also pace or vocalize excessively.

"Caffeine also raises blood pressure and causes cardiac arrhythmias, which can be dangerous."

Caffeine raises blood pressure and causes cardiac arrhythmias, which can be dangerous. Pets may also lose muscle control and have tremors or seizures. Caffeine affects the gastrointestinal tract and can cause vomiting and diarrhea. Vomiting may actually be a helpful side effect, since it can remove some of the toxin from the body. Pets may also need to urinate more just like people do after drinking a couple of sodas. Large ingestions of caffeine can be fatal to dogs and cats, especially if no treatment is given.

Dogs and cats are more sensitive to caffeine than humans are. While taking a sip of hot coffee or iced tea probably will not adversely affect most pets, ingestion of one or two caffeine pills can be fatal for small dogs and cats. Symptoms can start as soon as 30 minutes after ingestion and last for 12 or more hours. Many caffeine containing products also include additional ingredients, like sugars or other stimulants.

The degree of toxicity is determined by the amount of caffeine ingested as well as the size and health status of the pet. A large, young, healthy dog will likely have a better outcome than a small, old dog with kidney problems. But, regardless of age or size, caffeine can damage major organs like the liver, heart, kidneys, lungs, and central nervous system.

How much caffeine is too much?

Due to differing amounts of caffeine, the amount of a product that is needed to be ingested before toxicity is expected varies. For example, a 15 pound Sheltie would need to ingest approximately three teaspoons of instant coffee grounds for mild signs to develop and 10 teaspoons for the potential of severe signs. A cup of espresso has a higher caffeine content than regular coffee, so a smaller amount of espresso would need to be ingested for symptoms to develop.

How is caffeine toxicity treated?

As with all poisoning cases, early intervention is key to successful treatment. Call your veterinarian or Pet Poison Helpline, a 24/7 animal poison control center, at 1-800-213-6680 as soon as you realize your pet has consumed caffeine. Your pet’s veterenarian may induce vomiting to help remove the toxin from the system before it is absorbed and may also give activated charcoal to minimize absorption of any remaining toxin from the gastrointestinal tract.

"As with all poisoning cases, early intervention is key to successful treatment."

Supportive therapy with intravenous fluids will prevent dehydration which may concurrently occur secondary to vomiting, diarrhea, and the diuretic effects of caffeine. Intravenous fluids can also help the body to excrete caffeine as well as support kidney function.

Medications may be needed to treat muscle tremors and seizures, lower blood pressure, and to stabilize an irregular heartbeat. For adequate treatment and observation, be prepared to have your pet stay in the hospital through the day with mild cases and possibly for a few days in severe cases.

Pet Poison Helpline, an animal poison control center based out of Minneapolis, MN is available 24/7 for pet owners and veterinary professionals that require assistance treating a potentially poisoned pet. The staff provides treatment advice for poisoning cases of all species, including dogs, cats, birds, small mammals, large animals and exotic species. As the most cost-effective option for animal poison control care, Pet Poison Helpline’s fee of $65 per incident includes follow-up consultations for the duration of the poison case. Pet Poison Helpline is available in North America by calling 800-213-6680. Additional information can be found online at www.petpoisonhelpline.com

© Copyright 2021 LifeLearn Inc. Used and/or modified with permission under license.

*Closed for Lunch from 1-2 each day